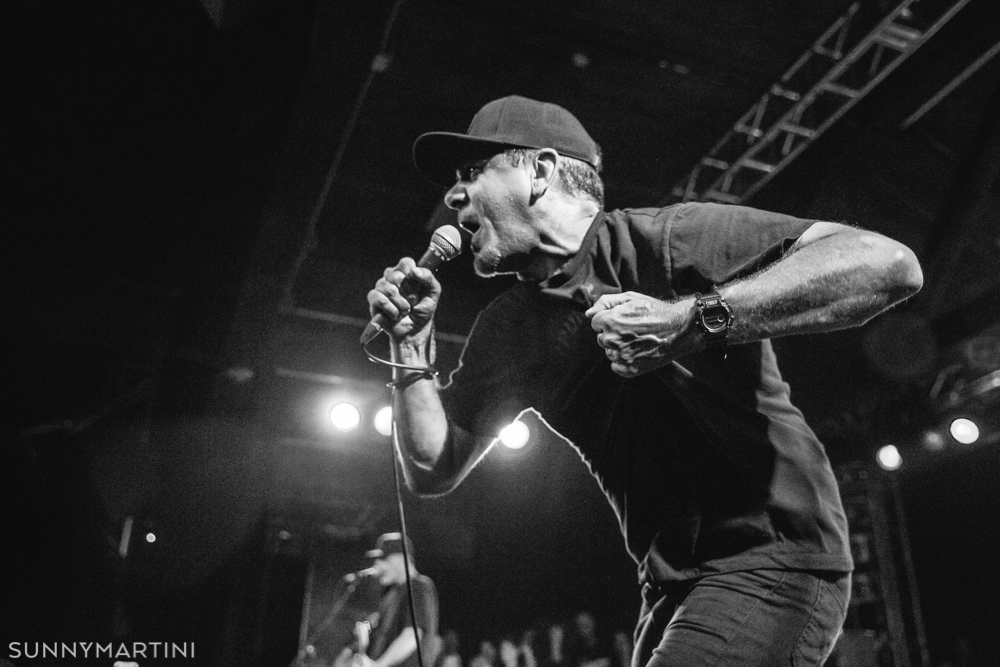 Wanna know what is great about being over 30 and still in love with the punk rock which roots modern day adulthood? Bands like Pennywise, Strung Out, and Unwritten Law still tour! Pennywise kicked off their About Time Tour at the Showbox SoDo last Friday, where they would resurrect and perform, in full, their 1995 classic album About Time.

Firing off the night was Unwritten Law. They conquered the stage with nostalgic sounds found in late Punk O Rama CDs and American Pie soundtracks, which ignited all of my lost teen angst. Their set ended after about 30 minutes with their melodious hit “Harmonic.”

After, the lights went dim to invite Strung Out, who ran out to the stage blaring a recorded version of Judas Priest’s The Hellion. The mosh pit broke into a frenzy with the ﬁrst strum of their opening track. The ﬁve-member band dispensed a mass of gratuitous energy back to the crowd, and they absorbed it like a sponge! Rob Ramos delivered high-powered guitar solos, and after 45 minutes of pure energetic punk perfection, the crowd needed a break.

Then the giants of punk respect and loyalty manned the stage. Pennywise took their instruments and Jim Lindberg grabbed the microphone to say his famous opening words, “We’re Pennywise from Hermosa Beach, California.” Fletcher Dragge struck the chord, unleashing the beast of a song “Peaceful Day,” sending the pit into an uproar, with mighty circle dancing so harsh you could hear hundreds of boots slam the ﬂoor. With the crowd panting from explosive exhaustion, Pennywise jumped directly into the next two songs on the album without missing a beat, “Waste of Time,” and “Perfect People.” Aggressive lyrics continued to rise from the mania-infused fans, as middle ﬁngers and ﬁst made devil horns topped the crowd. Oh yeah, we were pumped to hear this album live ﬁnally.

Byron McMackin pounded on the drums hard enough to make machine gun ﬁre sound slow during the chorus of “Every Single Day,” encouraging more adrenaline than most human beings fathom possible. Imagine as if your heart was beating out of its chest from the inside: this is how punk rock blood pumps, in a constant state of teetering on the line of cardiac arrest. In true Pennywise fashion, Fletcher called for a close friend and his sons to come out on stage, explaining how friends will always stick together during troubled times. Paying homage to surviving life’s struggles, the band shredded into “Not Far Away,” a song with the lyric “I’ve got a lot more living to do before my judgment day.”

It took Pennywise slightly over half an hour to reach the ﬁnal song from the album, “Killing Time,” but there was no way they were ﬁnished playing. Jim asked the crowd if they wanted to hear the band butcher any cover songs, which was followed up with Nirvana’s “Territorial Pissings.” All the while, Fletcher explained to the crowd how punk Kurt Cobain was. After the cover madness, they roused the crowd with “Fuck Authority,” “Society,” and ﬁnalized the night with the iconic “Bro Hymn,” dedicated to the late Jason Matthew Thirsk. Everybody on the side of the stage rushed to the microphones and yelled out lyrics with the band. Bassist Randy Bradbury shared his mic with three excited fans and screamed all the “whoa’s” along with them. When the “whoa’s” kick into gear, anyone can be conﬁdent that it is the end of the show.

About Time is a legendary punk album and the ﬁnal album Thirsk played before his tragic departure. “Bro Hymn” is a staple for Pennywise, not because it is one of their most well-known tracks, but because it deﬁnes everything Pennywise believes and lives for; what true punk attitude means. It’s all about support, togetherness, and, for lack of a better term, brotherhood. And that is why Pennywise has been making music that empowers us since 1988.