Christine And The Queens

By Kriston McConnell on October 28, 2016@Kristonisms 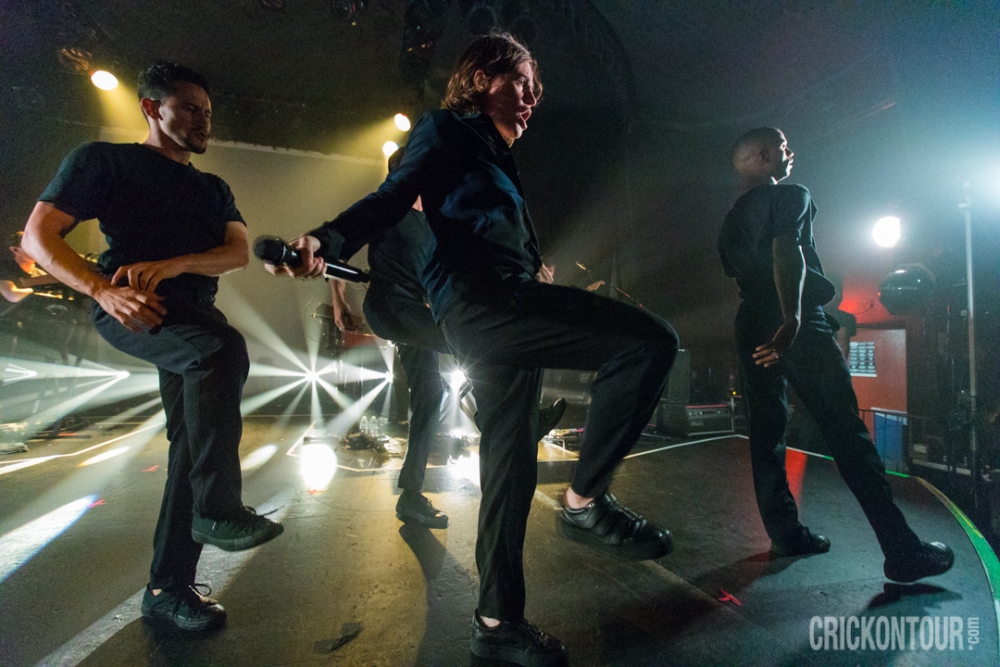 Singer/songwriter Héloïse Letissier is best known as her stage name, Christine And The Queens. The French singer has been releasing music since 2011, but only recently had a surge in popularity in the US. This is likely due in part to the release of her first English EP, Saint Claude. The EP has been a big hit with her English-speaking fan base, including a large portion within the United States.

Christine And The Queens ended their short US tour in the rainy city of Seattle – at the nearly 80 year old theater known as The Showbox. It was a sold out performance that promised to be electric – and the singer did not disappoint. Fans who attended the show were treated to great music, laughter and some very passionate performers.

Lemolo was the opening act of the night. The two-piece group is based out of Seattle, and they offer the perfect dose of dream pop. Each song sounds as though it is building to a climatic breakdown, but that breakdown never arrives. The song is perpetually building, which leaves the listener sitting at the edge of their proverbial seat. The songs have simple, dreamy melodies sustained by the singer’s ethereal voice. The drummer, Adrian Centoni, had an enormous smile on his face as he watched the crowd sway along with the music.

After Lemolo left the stage, it was time for Christine And The Queens to make their grand entrance. They opened with Letissier and two dancers silhouetted by a strobe backlight, and had four fabulous dancers on stage with her most of her set. They had choreographed numbers for almost every song which made every moment even more enjoyable. There were little surprises tucked away in each dance routine, including handstands and flips.

Every band should have dancers like Christine And The Queens. Their energy is intoxicating. The crowd oooh’d and ahhh’d as the dancers theatrically danced around on stage. It also helps that Letissier has a wonderful stage presence. She is in her own world when she is dancing. Every move she makes is laced with intention and emotion. She had the entire crowd dancing along with her every move.

The singer took breaks between songs a few times to address the audience. She is all about inclusivity and encouraging everyone to be who they want to be. “If you want to experiment here you can!” She shouted, “If you want to change your name, you can! If you want to become a bicycle, you can do that too.” During another break she took a moment to breathlessly express her love of RuPaul. He tweeted at her recently which clearly set her heart aflutter. “RuPaul is everything and everything is RuPaul.” She beamed.

Watching a video online of a singer performing is one thing, but witnessing their performance first hand is an entirely different experience. Letissier has an unbelievable amount of energy at her disposal, and she takes full advantage of it. Her use of dramatic lighting pulled the audience into another world with her, and captivated the everyone until the end. It was a stellar performance, and any fan of the musician should take the time to see her live whenever she is in town.

Kriston began her writing career as a passionate music fan. She attended dozens of shows, purchased CDs, vinyl and even cassette tapes of artists she barely even heard of. Shortly after joining a band's street team she happened to meet blogger Jacob Tender (now with Alternative Press) who asked her to write for his blog. After a couple of months he joined the staff of Under The Gun Review, and brought her along for the ride. After spending four years as a major contributor to the publication she moved on to be a web content contributor for New Noise Magazine, whose print magazines have a national reach.
Related ItemsAlex Crickchristine and the queensFeatureKriston McConnellThe Showbox
← Previous Story Cathedrals Concerts with Jeremy Enigk, Laura Gibsion, Tomo Nakayama, and Andrew Joslyn’s Passenger String Quartet
Next Story → Black Rebel Motorcycle Club: Moody in Seattle