By Christine Mitchell on October 31, 2016@Housetornado37 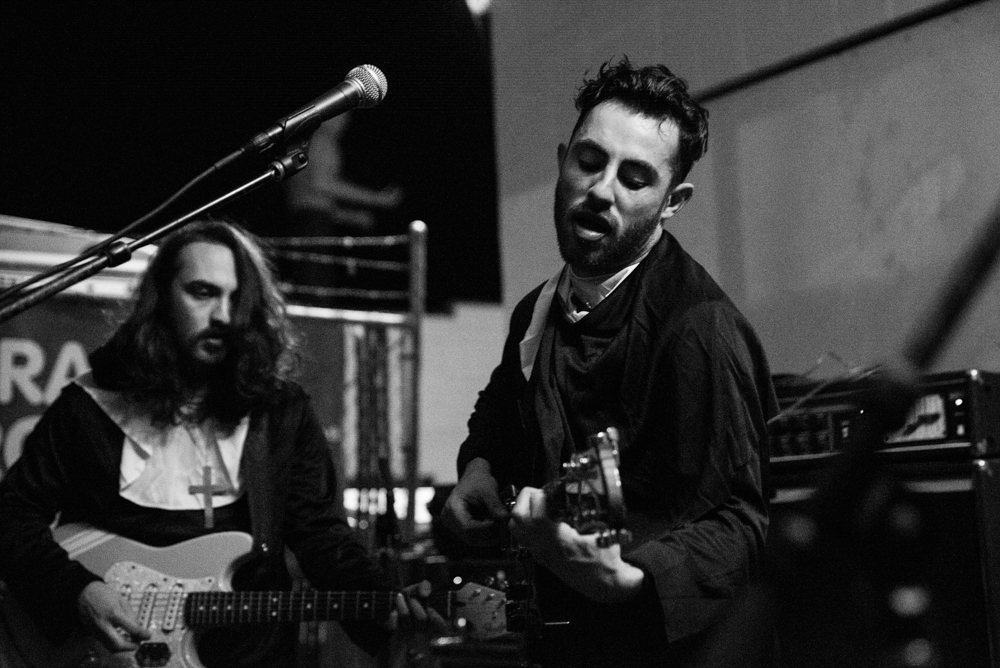 The Everett Music Initiative’s Halloween Bash took place in an unorthodox venue. The Soundview Bar and Grill isn’t necessarily built to accommodate live music. The bands played in a corner of the bar’s outdoor beer garden that was partially obscured by a trellis covered with dying creeper vines and lit by a single, oddly fancy chandelier. But it turned out to be perfect: the damp, dank, dim space became otherworldly when filled with costumed individuals and emphatic performances by Iska Dhaaf, Spirit Award, and The SkyeMonkey.

The SkyeMonkey took the steadily growing crowd on a proggy, fantastical journey that was amazingly multilayered for just a guitar and drums. Singer/guitarist Timothy Hill has an incredible set of pipes that verge on operatic, which was a great fit for the band’s intricate, storytelling lyrics. Drummer Joel Berger was fantastic on the drums, his timekeeping full-bodied without being overbearing. Tolkein-esque tales unwound as the duo performed in shiny silver masks covered with overturned crosses, and the mood was set to spooky.

Spirit Award took over the middle portion of the bash with an aurally arresting set. The grooves that the band produced were the type that make you close your eyes, shutting out competing senses in order to pay attention to the textures of the driving music. Spirit Award seemed to be completely lost in their own world at times: their eyes were closed as well, the mental body of the band performing as one entity.

The members of Iska Dhaaf were plainly present throughout the night. They were easy to spot due to their matching nun’s habits, complete with gold rosaries. When it came their turn to take the “stage,” they absolutely stole it with a set that was cutting and encompassing of the entire patio, crowd included. The weirdness of it all, from the sunken area that the band was sandwiched in, to the cold damp seeping into everyone’s toes, to the wide variety of Halloween dress: all of it was made sublime when Iska Dhaaf started up. It was that feeling you get when you know that you’re witnessing and taking part in something sort of secret and extremely special.

The band has been on tour for the past two months and have crisscrossed the country. Everett’s music faithful got the result of this: a band that has its set screwed down tight, and a band that is excited to share their music with everyone in every circumstance. The nun costumes were just the cherry on top, but they didn’t hurt, not by a long shot. Singer/guitarist Nathan Quiroga and keyboarist/vocalist Benjamin Verdoes lifted their hands in gestures like they always do, but the religious imagery elevated these movements to a level of spirituality over their usual emphasis. Quiroga especially wrestled with his hood: he simply couldn’t stay still long enough for it to stay put. He doggedly replaced it again and again, at one point holding it in his mouth so that he could continue playing guitar. But it didn’t stop him from going out into the crowd repeatedly, his rosary flying about his neck as he sang with force. Songs like “Invisible Cities” from their LP The Wanting Creature were performed with intensity, and the crowd responded by dancing and giving their vocal approval. At the end of the night, Quiroga invited those present into the band area, where everyone sang along to the final chorus, dressed in their Halloween finery, beers held aloft. Iska Dhaaf’s dark energy was a skin tight fit on that dark fall night.

Christine Mitchell has been poring over album liner notes pretty much since she acquired the skill of reading, and figured out the basic structure of rock songs at an early age. Whether it’s the needle popping into the first groove of the record, the beeps that signal the beginning (or end) of a cassette tape, or digital numbers ticking off the seconds from zero, music brings Christine happiness, ponderous thought, opportunities for almost scientific study, and sometimes a few tears. When she started attending live shows two decades ago, a whole new piece of the puzzle clicked in and she has been hooked ever since.
Related ItemsChristine MitchellFeatureIska DhaafSpirit AwardThe SkyemonkeyThe Soundview Bar and Grill
← Previous Story 10 Years in the Black Tour at the Showbox Sodo
Next Story → Epica To Perform at Studio 7