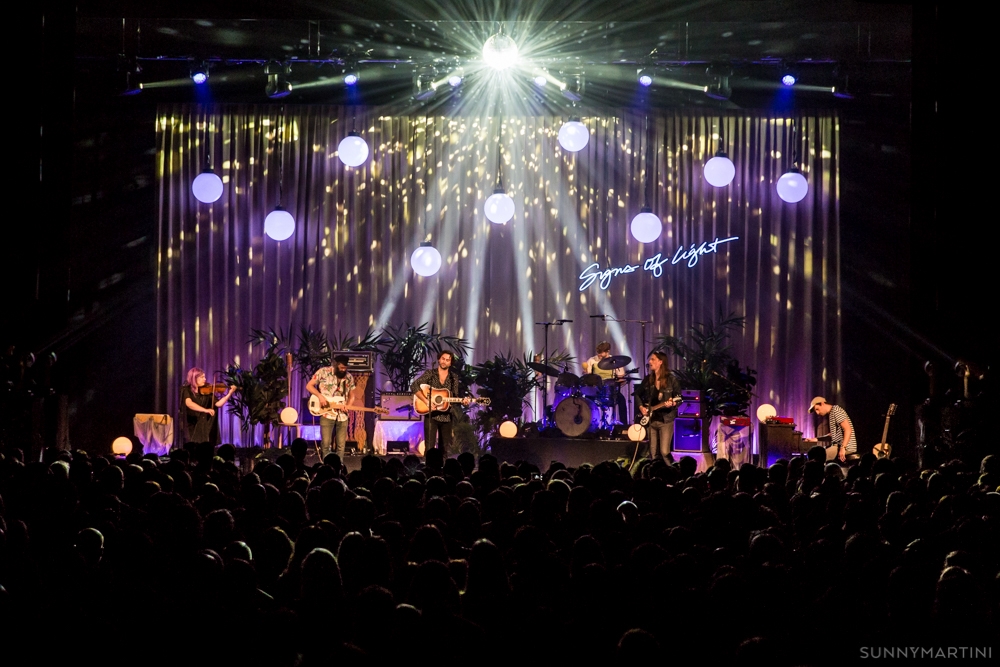 The Head and the Heart at Paramount Theatre (Photo: Sunny Martini)

Known for their intimate folk-pop and incomparable harmonies, The Head and The Heart have gone from playing tiny Seattle pubs to selling out three straight nights at The Paramount. From their self-titled Sub Pop debut just five years ago to this year’s third release, Signs of Light, the now Warner Bros.-signed six-piece has added sunny flair and plenty of gloss to their homey, well-crafted sound.

Their fall tour began with just a single Seattle date, but quickly expanded into three sold-out nights. We caught the middle show, featuring opener Declan McKenna. McKenna – a 17-year-old English artist – might be new to the scene, but he’s certainly not short on energy. He and his three-piece band delivered a lively set of warbly alt-pop that was both fun and sparklingly intelligent.

The Eagles’ “One of These Nights” came over the speakers, the lyrics “We’re gonna find out, pretty mana, what turns on your lights,” ringing cleverly through the cavernous room. As THATH entered the stage, their album title – crafted of vintage-looking neon – flickered to life across a curtained backdrop and softly glowing orbs lit above them. If nothing else, the stage and lighting design for this tour are impeccable. Large, almost tropical houseplants filled gaps between instruments on stage, and the band kicked off their set with rollicking new single “All We Ever Knew.”

Everyone in the crowd was clapping along to the easy-going beat, singing along with the band’s gorgeous multi-part harmonies. While lead vocalist/guitarist Josiah Johnson is still missing due to health reasons, Matt Gervais (of Seattle’s Mikey And Matty, also THATH member Charity Thielen’s husband) filled in well, and the band felt very familial on stage.

THATH make music that is both heartwarming and heartbreaking. It’s well-crafted folk-pop that goes from the somewhat creepy, honky-tonk piano of “Ghosts” to the sweeping romance of “Rhythm & Blues” with ease. Their set for the night was a substantial one that spanned all three of their albums. The players were spread wide across the stage, but made efforts to interact with one another. The vocals of multi-instrumentalist Thielen, guitarist Jonathan Russell, and Gervais, ranged from whispering and gruff to soaringly powerful, arranged in such a way to capture a cinematic emotional response that the band has definitely nailed. And their instrumentation was spot on. Banjo, tambourine, gorgeous piano ballads. All the elements were there.

The crowd cheered heavily at the opening strains of signature track “Lost In My Mind” before all of McKenna’s band returned to the stage to dance around, high-fiving and carrying each other on shoulders. The night felt like a big family affair, which is exactly what THATH’s music feels like anyway. Every song had the crowd singing along, swaying, clapping, and they closed their encore with the exceptional “Rivers and Roads.”