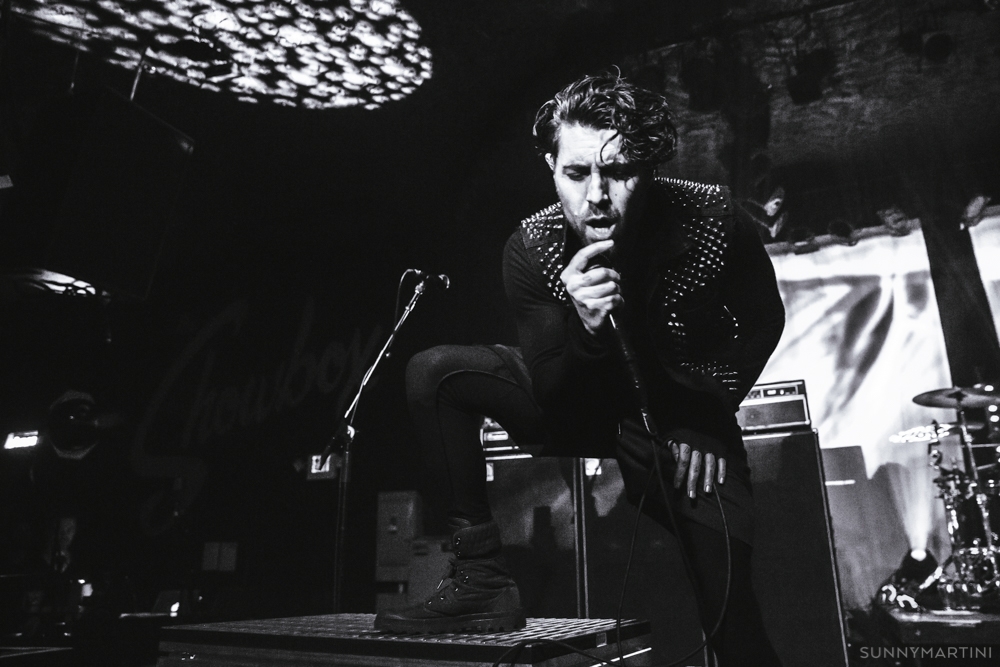 It’s been 25 years since the ramshackle start of AFI (A Fire Inside) as a bunch of high-schoolers who didn’t know how to play any instruments. Fast forward to Seattle’s storied Showbox and a sold out crowd of people who ten years ago would have been party punks. They’re now adulting as software engineers and school teachers on a rare night out. A few toted babes in arms. These devoted fans certainly showed up, and not just to relive nostalgia.

Unlike many a band cashing in on reunion tours lately, AFI were out in support of their latest release, AFI (The Blood Album). The self-titled album is their tenth studio work, released just five days before the show, and some were claiming it their best work since 2003’s revered Sing The Sorrow. AFI has inspired an ardent following of their career with their undeniably raw energy, and that energy was on display.

But first, we began the night with LA’s Souvenirs, an indie-rock foursome supporting their sophomore release, Posture of Apology. While the crowd wasn’t quite full yet, the band’s mid-tempo set kept their attention. Opening for a band as powerful as AFI has to be a challenge, and Souvenirs did admirably. Their half-hour set of emo-laced, dreamy indie-rock stuck to its groove, and instrumentation was on point.

Next up were indietronica band The Chain Gang of 1974. Ten years into their career, the band has hit on a synth-heavy dream of a sound, and their 45-minute set delivered plenty of dancefloor-ready tracks. Vocalist and multi-instrumentalist Kamtin Mohager was clearly the tone-setter for the band, giving the set all he had, including catchy hooks in spades. They kicked off the set with the long cymbal rides and sweeping bass of “Miko,” off 2014’s Daydream Forever. The track is heartfelt and dynamic, themes that recur throughout the band’s work.

By the third track, the group’s latest single, “Slow,” Mohager removed his jacket and  woke the room up with gritty, fuzzed out beats and three-part harmonies. He thanked the crowd after nearly every song, clearly glad to be in front of a great room, and their set never slowed down. “Lola Suzanne” got a bit more rock, with a falsetto chorus, while “Ordinary Fools” showed off a swingier, love song persuasion. Chain Gang haven’t put out a full length in three years, so it will be interesting to see what the band is working on next. They’re about to head out on their own headlining tour, another chance for them to show off their chops with sparkly, anthemic tracks that hit the sweet spot of synth-pop.

And then there was AFI. The rabidness of the fans was suddenly apparent, and warranted. The longtime alt-rockers took the stage, the crowd’s phones in the air to capture the very moment, and vocalist Davey Havok was immediately on the monitors, fists in the air, for “The Leaving Song Pt. II.” The frenzy of the crowd was matched by the energy of the band, the tracks coming alive as the personal anthems they’ve become to so many of their fans.

Multi-colored strobes flashed through a 75-minute set that featured new tracks and longtime favorites, many feeling virtually interchangeable. The room was packed and bodies danced in every corner, the band’s aggressively visceral sound hitting a high note with every last fan. The crowd-surfing started early, and during “17 Crimes,” guitarist Jade Puget nailed an exceptional solo standing center stage, fans tumbling over the barricade. The band kept the banter minimal, really only stopping to thank the fans, and powered through their set with barely a moment between tracks.

Havok was, as usual, overtly theatrical, bounding about the stage, all arms and legs and jumps. He’d raise the mic on tracks like “Beautiful Thieves” and let the crowd sing the lyrics back at him. He stood before them during “I Hope You Suffer,” commanding the room before god-walking and falling into their adoring arms. Usually, he does this on “God Called in Sick Today,” a song notably absent from this tour’s set list. Once Havok was reunited with the stage, they closed the set with the radio friendly hit “Silver and Cold,” clearly another favorite, and Havok raised the mic stand across the front of the room, letting the fans take over.

Unsurprisingly, they killed their encore – double encore, in fact – with their cover of The Cure’s “Hanging Garden,” and a final “Morningstar” that saw Havok crouch down quietly while fans lit their lighters and held phones in the air. If you haven’t seen AFI live, you haven’t really heard them. They’re a band that you need to see and feel to really get it, and a quarter-century in, they haven’t lost a beat.

AFI Set List
The Leaving Song Pt. II
17 Crimes
Aurelia
Girl’s Not Grey
Greater Than B4
The Conductor
Bleed Black
Beautiful Thieves
Still A Stranger
The Killing Lights
The Boy Who Destroyed The World
The Days of The Phoenix
Snow Cats
I Hope You Suffer
Silver and Cold
The Hanging Garden
Miss Murder
Morningstar