The Dark Corners Of Underoath And Bring Me The Horizon 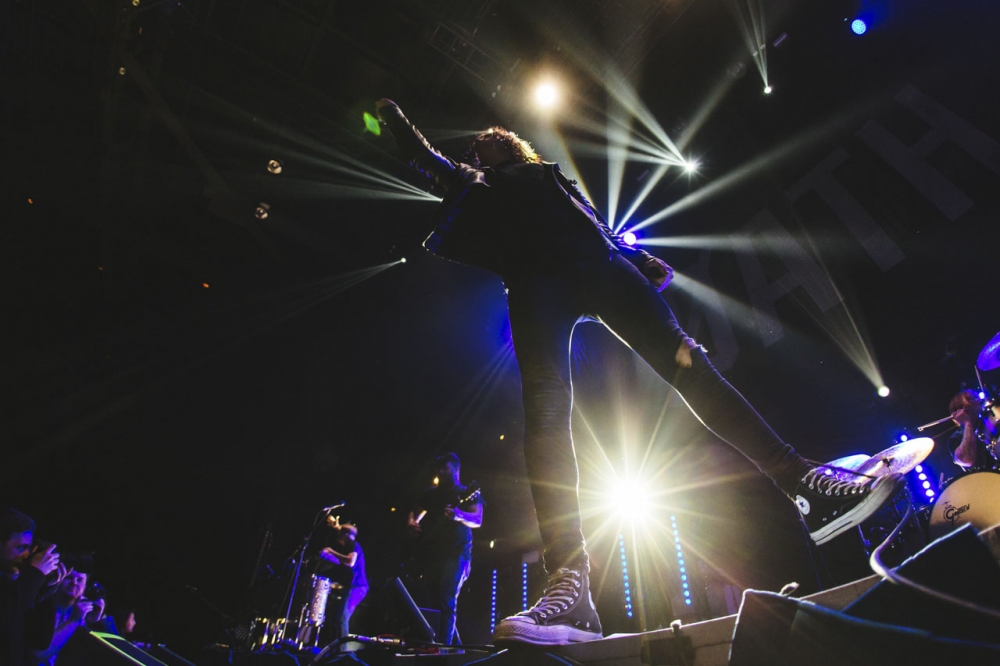 WaMu Theatre was so dark that the corners of the cavernous space disappeared into a fog-drenched ether. But it seemed only appropriate for the night’s lineup of The American Nightmare Tour, featuring Bring Me The Horizon, Underoath, and Beartooth.

Ohio hardcore punk five-piece Beartooth opened the night, taking the stage to AC/DC’s “Back in Black” under a giant logo banner. Lead singer Caleb Shomo screamed at the crowd “You are gonna jump. You are gonna mosh. You are gonna punch somebody. And you are gonna sing at the top of your lungs,” before breaking into the title track off their sophomore release, Aggressive.

The mosh pit opened up immediately, and someone was crowd-surfing within the first fifteen seconds of their set, setting the stage for the rest of the night. Though only two albums into their career, BT seemed committed to their sound. They head-banged their way through the intense 30-minute set amidst saturated strobes that spun through the dark.

Next up were Underoath, after a prolonged testing of severe strobe lights during the break. The crowd clapped enthusiastically as the band came on, obviously familiar with them despite the fact that their last tour was actually a reunion tour. The band members hovered actively at the edge of the stage, getting the crowd pumped throughout the set. “In Regards To Myself” got the crowd jumping, hands up, while lead vocalist Spencer Chamberlain tossed his mic through the air.

At one point, Chamberlain asked the crowd if it was okay to play an old song, and as soon as “A Boy Brushed Red Living in Black and White” started, everyone was singing along. “Reinventing Your Exit,” one of Underoath’s biggest hits, drew even more appreciation from the crowd. And they finished their set hinting they’d be back next year, so there’s likely new work on the way.

Still out supporting the release of their 2015 album, That’s The Spirit, BMTH took the stage under a bright, LED-starred backdrop, a big drum riser in the back, every cell phone in the crowd raised in the air and set to record. They kicked off their set with “Happy Song” while shooting rainbow streamers and smoke cannons over the crowd. Everyone was shouting along: “Ready, Let’s Go,” signalling that they were.

Lead singer Oliver Sykes shouted at the crowd to push back and spread out so that no one got hurt, but that didn’t stop the crowd surfing and constant jumping around. Sykes gave an energetic performance, climbing the riser and jumping all over the stage. The band tore up every track, and the crowd knew every word.