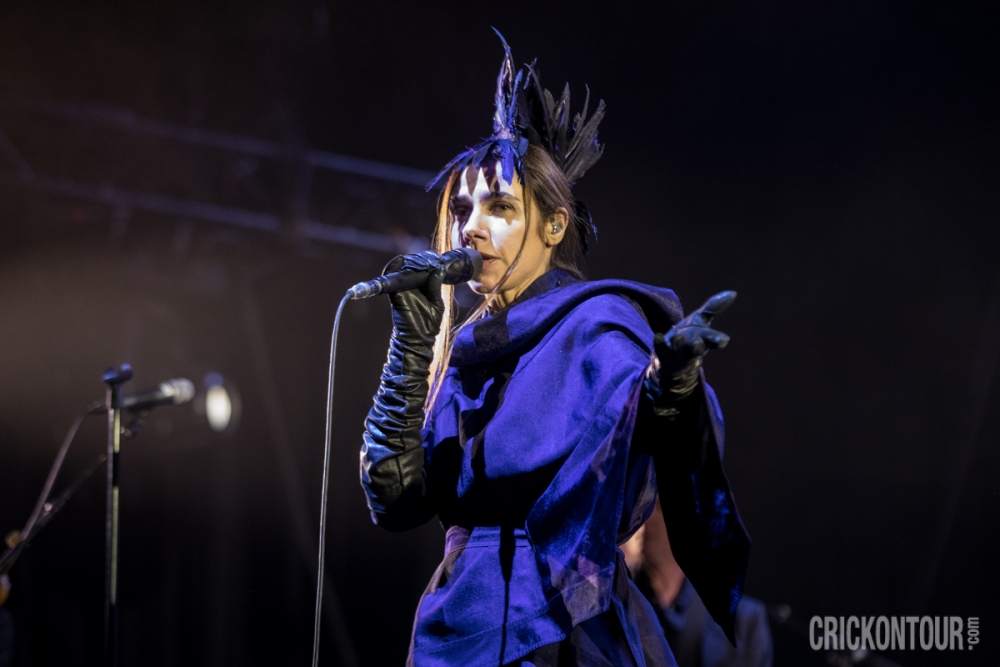 PJ Harvey’s show at WaMu Theatre started with a marching band coming onstage, much the same way you would see a street marching band in a parade. Once the band got settled, Harvey put down her alto saxophone, walked over the the microphone, and started singing. One audience member asked who the opening band was, that’s how subtle her entrance was.

Most of the material for this evening was from her latest album, Hope Six Demolition Project. This album, combined with the book The Hollow of the Hand she released with photographer Seamus Murphy, has pulled together an incredible project of poetry, photographs, and songs about her visits to Kosovo, Afghanistan, and Washington DC.  These places have more in common than we would like to think about here in America. The major connection is how each place handles poverty and, of course, the politics. It’s dirty, uncomfortable, and the rich white politicians don’t care about you or your family struggling to survive.

During the opener, “Chain of Keys,” the most noticeable difference from the album was the impact of the bass drums. Large marching drums complemented the drum set and made a wonderful impact during the rest of the concert. An Escher styled backdrop was flown up from the bottom of the stage behind the band  during “Ministry of Defence” to signal that things had really started for those that still hadn’t quite figured it out. Harvey sported a long gloved outfit that resembled a bluebird and a crow at the same time, like cosplay for Let England Shake.

“Community of Hope” saw the front light taken off Harvey to highlight the band. The show was mostly backlit, making use of side light to create drama and shadows. This darker lighting, combined with footlights on the edge of the stage, added to the intensity of the material. The percussion was mostly acoustic, and plenty of help filled the stage, with ten musicians total. The horn section was particularly noticeable, with Harvey on alto sax while baritone sax and soprano met to create a vaguely dirty, smarmy, goth marching band sound. There were elements of avant garde jazz in some of the solos.

“Let England Shake” reminds the crowd that England holds its wars closer in memory than we do, WWI being the focus, and then the band goes into “To Talk To You” from White Chalk, which tackles relationship territory. The relationship here seems to be with a ghost, and PJ Harvey uses the highest part of her range. She’s almost completely silent before this song begins and the audience begins to get restless for the first time. “The Wheel” seems to be about 28,000 children disappearing, and it’s one of the best tracks from the new album. Harvey played the sax for a lot of this song, and it’s heavy and great. It’s also fun to see her playing an instrument for this show, even if it’s not the usual guitar or piano.

The biggest moment of the night comes with “50ft Queenie.” It was loud and strong, but there were so many other instruments happening on stage that the vocals just didn’t rock over the whole thing live like it does on the recording. There was one red maraca on percussion, which was adorable. A couple of other songs also appeared to suffer from the full, live band treatment; the recorded versions are delicate, which is hard to duplicate onstage. “To Bring You My Love,” however, did pretty well with the full band. Somehow it managed to sound like hair metal, but in a good way, and it ended with a great mandolin solo.

The encore turned out to be the oddly bombastic “Near the Memorials to Vietnam and Lincoln.” After this, it takes a while for the house lights to come up, but eventually they do, albeit without a second encore. All in all, fans will definitely not be disappointed when it comes to PJ Harvey.

Alex Crick is a Seattle based freelance photographer specializing in music photography. His interest in photography began as a school project in the early-90′s, when he also attended many live music shows. Eventually, he combined these two interests by conveying the power and excitement of live music through the eye of the camera. Over the years, he’s traveled all over the country photographing live musical acts. You can find samples of his work in SPIN, Billboard, Esquire. View his work here
Related ItemsAlex CrickAngela ThibaultFeaturePJ HarveyWaMu Theatre
← Previous Story Real Event throws first bash in Everett
Next Story → Testament levels the Showbox