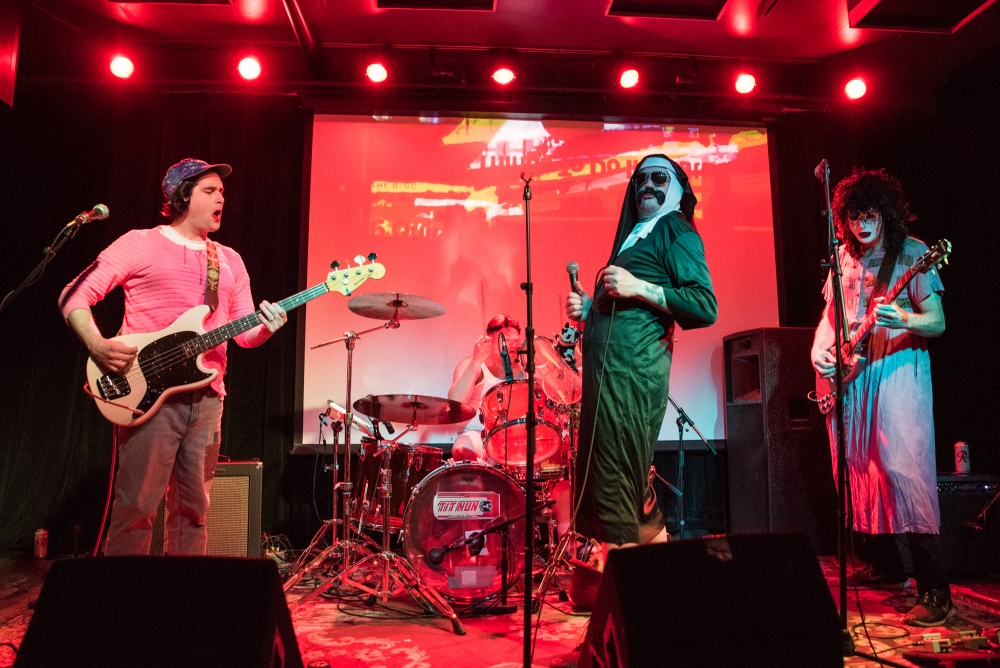 Substation’s Downstream Music Fest + Festival, created and curated in direct response to Paul Allen’s Upstream Music Festival + Summit, celebrated the antithesis of its inspiration: non-corporate, anti-viability, and pro shock value. And it succeeded on all fronts, and only in part due to the schlockiness of a large percentage of the bands participating on the main stage (think of the weirdness of The Fabulous Downey Brothers, who performed at Upstream, multiplied by four with a mountainous helping of crazy outfits and sexual posturing).

The three nights of Downstream also featured a second stage, each night highlighting a different genre, from hip hop/Afro-punk and soul to metal. SMI was present on night two of the fest, and each of the four bands played (more or less) rock and punk of the sort that would have easily slotted into an Upstream stage. Some of these bands were denied by Upstream, which is surprising considering their talent. But, denied or not, here they were, playing to a packed crowd who were also not at Upstream for reasons of their own (the exorbitant ticket prices, the desire to hear music outside the norm, solidarity). As festival attendees flitted between the two stages, they had the opportunity to buy handmade art and also freshly made tortillas with various fillings. The mood was one of community and coziness.

There was also talk of Upstream, and it was eye-opening. What if, as a musician, you don’t want to create music for video games and commercials to support your art? What if you just want to make art? What if your fans can’t afford to attend Upstream? What if you, as a *musician,* can’t afford to attend Upstream? Several of the musicians present said that they would have attended the larger fest themselves to support their friends’ bands who had the opportunity to play there, but the cost was prohibitive. And then, if you had been to Upstream: what was it like? Does it suck? Is anyone there? Who is your favorite band so far?

The evening kicked off with Vigilante Santos, their pleasant, western-tinged tunes sounding warm in the red room lit by two chandeliers. Their set would have blended well with the likes of Tellers. Singer and guitarist Colleen Thomas is gifted with a wonderfully soothing voice. As Vigilante Santos’ set wound down, the band Downtown ratcheted things up on the main stage. Their sound was hardcore, electronic, and aggressive, accentuated by singer Nicholas Markel’s Rollins-esque stage presence. They were the most straightforward main stage act of the night, and their driving sound was an Upstream antidote in and of itself. Sure, Upstream may have had a metal stage, but it was pushed to the outskirts of the festival’s footprint. Downtown was in the epicenter of Downstream and was fully embraced.

Back in the dimly lit back room, Oliver Elf Army sparkled. The hypnotic lyric-trading and harmonizing of Martin and Mary Adams won hearts over, and though those lyrics were slightly twisted, there was an alluring pop sheen that exuded joy along with a crunchy back end provided by one Henry J. Yarsinske, whose entire family seemed to be in attendance at Downstream (his college graduation was the same weekend). OEA could easily, easily have been slotted right next to Wimps at Upstream and no one would have batted an eyelash.

Things were getting weird at the main stage. A band calling themselves Jugs of Blood were, well, covered in blood and belting out the most crazy songs like “Rape Sloth” and another about a Sasquatch doing the nasty with himself. Yarsinske’s extended family were in the back of the room, eyes wide and completely bemused. The Reverend Doctor Metal Matt bellowed into his mic, his eyes kohled black, which accentuated his piercing glare. So the schlock began, and it was pretty darned enjoyable.

Crystal Desert eschewed schlock in favor of authenticity. It feels like every shredded vocal tic, every crooked hunch, and every instrument attack is coded with purpose. Of all of the bands this night, this one should have been pulling a crowd down at Pioneer Square. As it was, the crowd in that back room was completely enthralled, and this in spite of the fact that Crystal Desert completely flipped the lights off before starting their set, performing in the dark, awash in dancing laser lights. It was so good, it was almost painful. At one point during the song “Revenge Complex,” singer/guitarist Ryan Alexander substituted some lyrics, stating “MTV/EMP/Paul Allen is afraid of me/Windows XP.” The band was raging and impeccably great.

Thank goodness for Crazy Eyes, who also opted to leave the lights off in the back room. They began their set with their usual build up, repeating “The Night Light is Humming” in various, screamy, freaked-out ways mixed with gibbering laughter. Their piano acted as a sort of night light itself, providing the only constant source of light, an altar to their off-kilter, yet melodic music. Crazy Eyes were manic, crashing into each other both literally and figuratively during songs. The band always gives a solid performance.

The night’s last band was Tit Nun. Its members were all dolled up in drag like T. Rox, yet it was (thankfully) a few ticks back down the lunacy dial both visually and musically. Tit Nun’s songs were hard driving and fun, and they dedicated their performance to Mother’s Day (they were dressed as Sexy Mom, Soccer Mom, Grandma, and Pregnant Mom – who was smoking). The lead singer *obviously* started things off in a nun’s habit, albeit with state trooper sunglasses and a prodigious fake moustache. He then morphed into the Grandma character and from that point things kept getting switched around and tossed off until he was in his Union Jack skivvies, at which point the band saluted all mothers with a cover of Danzig’s “Mother.” It really was a barrel full of monkeys full of fun; people were smiling and laughing and engaged.

Downstream embodied a strange yet alluring dichotomy. On one hand, the festival thumbed its nose at what was going on down south, preferring to ham it up and provide an affordable (ten dollars a night) alternative that was TRULY an alternative to Upstream. On the other hand, however, Downstream provided a voice to undeniable talent. It remains to be seen what tangible benefit musicians performing at Upstream reaped. Perhaps, in the end, what is important is the same: that they are heard.

Christine Mitchell has been poring over album liner notes pretty much since she acquired the skill of reading, and figured out the basic structure of rock songs at an early age. Whether it’s the needle popping into the first groove of the record, the beeps that signal the beginning (or end) of a cassette tape, or digital numbers ticking off the seconds from zero, music brings Christine happiness, ponderous thought, opportunities for almost scientific study, and sometimes a few tears. When she started attending live shows two decades ago, a whole new piece of the puzzle clicked in and she has been hooked ever since.
Related ItemsChristine Mitchellcrazy eyesCrystal DesertDownstreamDowntownFeatureJugs Of BloodOliver Elf ArmySubstationTit NunTrannysaurus RoxVigilante Santos
← Previous Story Upstream Fest + Summit Recap
Next Story → Actionesse Rolls Out ‘Fortune’