Home / Reviews / Festivals / Pain In The Grass 2017 Heats Things Up

Pain In The Grass 2017 Heats Things Up 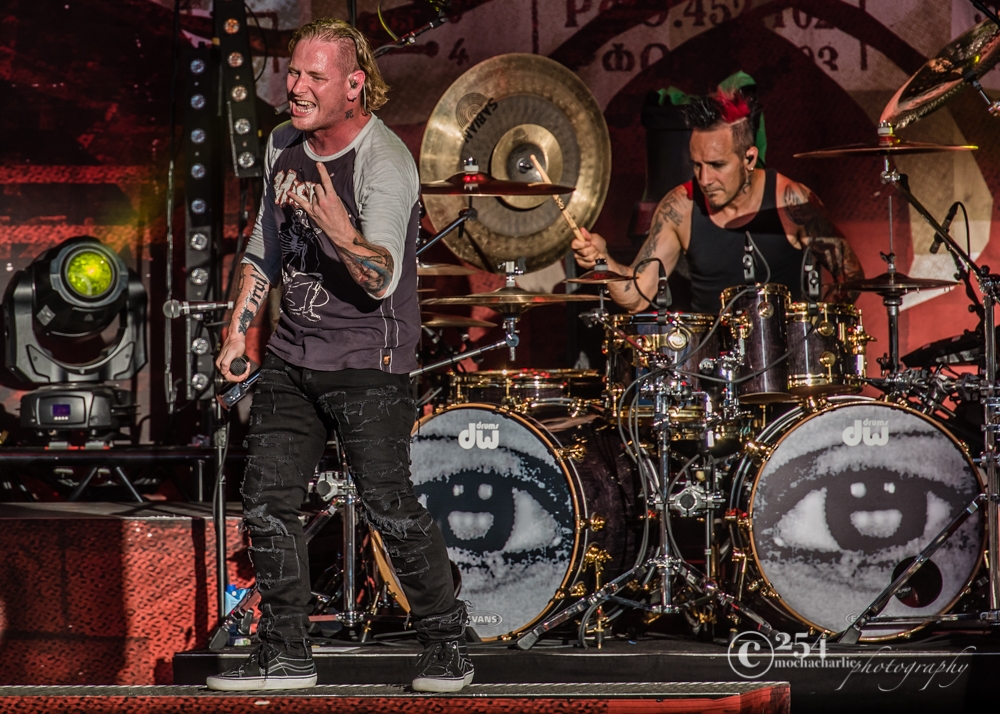 KISW put together a hot lineup for this year’s Pain In The Grass festival last weekend at White River Amphitheater, and Mother Nature brought out the sun and the heat. With temperatures topping out at over ninety degrees, lines for “cold beer” and the water refill station never seemed to be empty. Bands performed on two stages, with one in full sun, and crowds were pretty dispersed throughout the grounds, eating, listening, watching, and rocking out while trying to escape or embrace the heat. 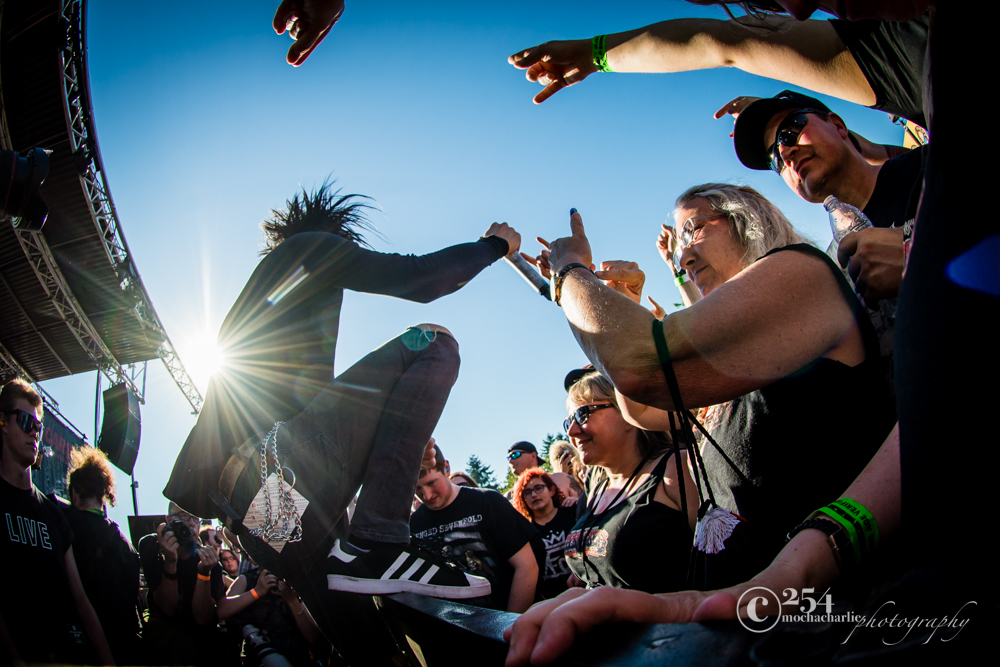 Local band Ten Miles Wide (formerly The Mothership, read why they changed their name here), opened up the day with a fast-paced main stage performance, setting the tone for what was to come. As crowds acclimated to the rising heat, other early afternoon slots were filled with bands like Islander, Code Red Riot, Radkey, and Aeges. With temperatures leveling out to just below he one hundred degree mark, thicker crowds began to form to watch Yelawolf (no photography was allowed during his set), Otherwise, The Pretty Reckless, and Like A Storm, who continued to show the crowds that weather doesn’t stop their ability to entertain fans.

It was as if an unforeseen magical (rock ‘n’roll) force was enabling fans to find strength to become more engulfed with each band’s performance as the day went on. They became more interactive with the bands as they sang, shouted, and clamored for sets to continue at their end.

When Baby Metal took to the stage, the Amphitheater went wild for this Japanese all girl pop group. Their dynamic on stage seemed to hypnotize throughout with their synchronized dance moves, as the crowds chanted “Baby Metal!” and sang along during specific dynamic lyrics, which were all in Japanese. Their set was a fun-filled and energetic performance, satisfying both rock and metal fans alike. 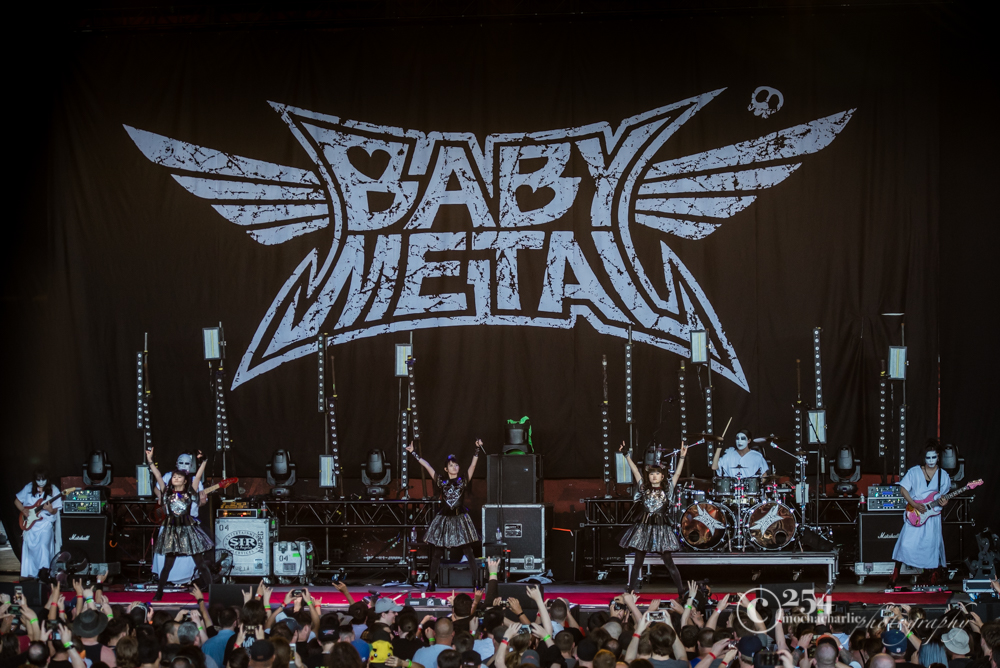 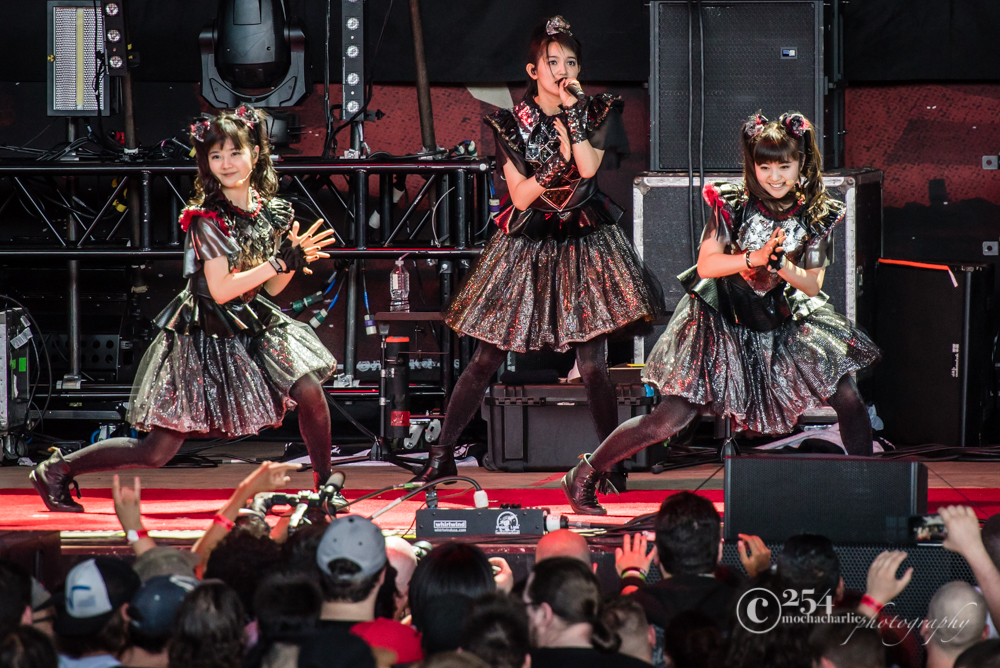 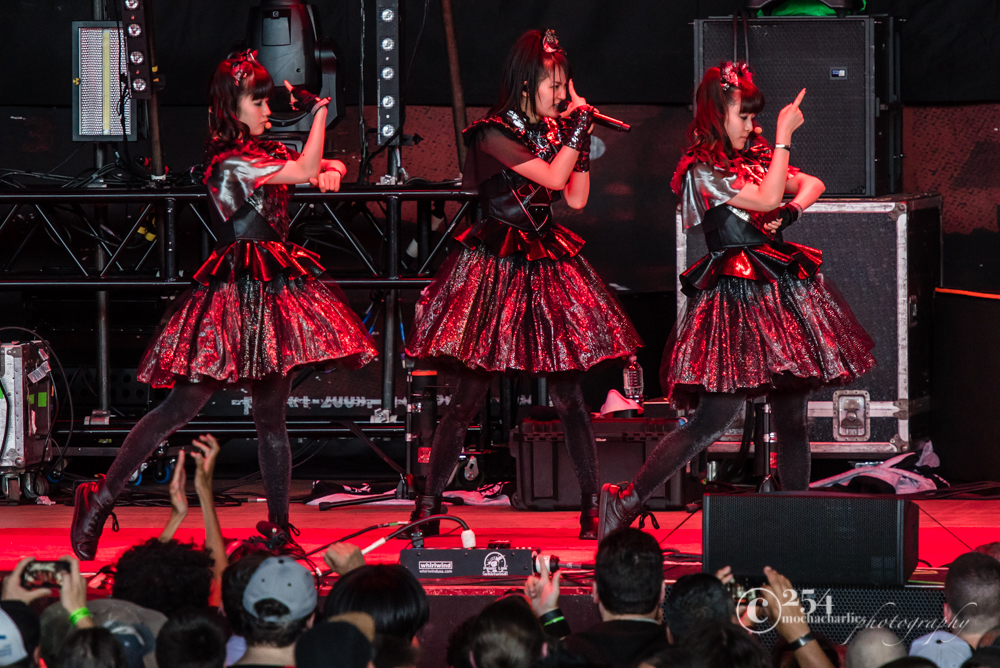 Finishing off the secondary stage late in the evening were Fozzy (fronted by WWE’s Chris Jerico) and Josh Todd & The Conflict (fronted by Buckcherry’s, Josh Todd), who both drew crowds of admiring fans. By the time Stone Sour played, the sun’s rays were peering like daggers directly onto the main stage in the amphitheater, forcing lead singer, Corey Taylor (Slipknot), to don his shades for the majority of the set.

As a fan in a wheelchair crowd surfed mid set, Stone Sour’s music continued to rock on to near perfection, as the crowd cheered and moshed along to the beats. Korn took the stage just after 9pm to a dramatic strobe light show, lighting up the massive crowd who took to the amphitheater, beers and other cold drinks in tow, for the last bit of rock music they could consume for the day.  They rocked on well into the late night hours, as the temperatures dropped to around the eighty degree mark.

For those of us living in the Pacific Northwest, in diversely mixed musical communities, music fans are treated to numerous festivals here throughout the year. KISW’s Pain In The Grass is a unique and anticipated festival to which crowds come from all over our region to spend the day experiencing metal and rock bands, the only one left to do so here. With the line-ups that they continue to curate, crowds flock to the opportunity to be a part of this yearly event. Can they top it? We’ll just have to wait until next year.

Mocha Charlie is an amazing photographer who has a real passion for music. She covers and shoots several shows per month in and around the region. She a brilliant photo journalist but most importantly, she is also a mother who does her best to balance out her life and live it to the fullest. Mocha Charlie uses her passion and talent to support the community, her friends and family any way that she can.
Related ItemsAegesAuburnBaby MetalbandsChris JericoCode Red RiotFeatureFozzyheather fitzpatrickIslanderJosh Todd & The ConflictKISWKornLike A Stormmetal bandsMocha CharlieMusicMusic FestivalOtherwisePain In The GrassRadkeyRock BandsStone SourTen Miles WideThe Pretty RecklessWashingtonWhite River Amphitheater
← Previous Story Locomotive EP Release Party at Louie G’s Pizza
Next Story → Queen With Adam Lambert ROCKS The Key