Double Devotion From Deftones and Rise Against 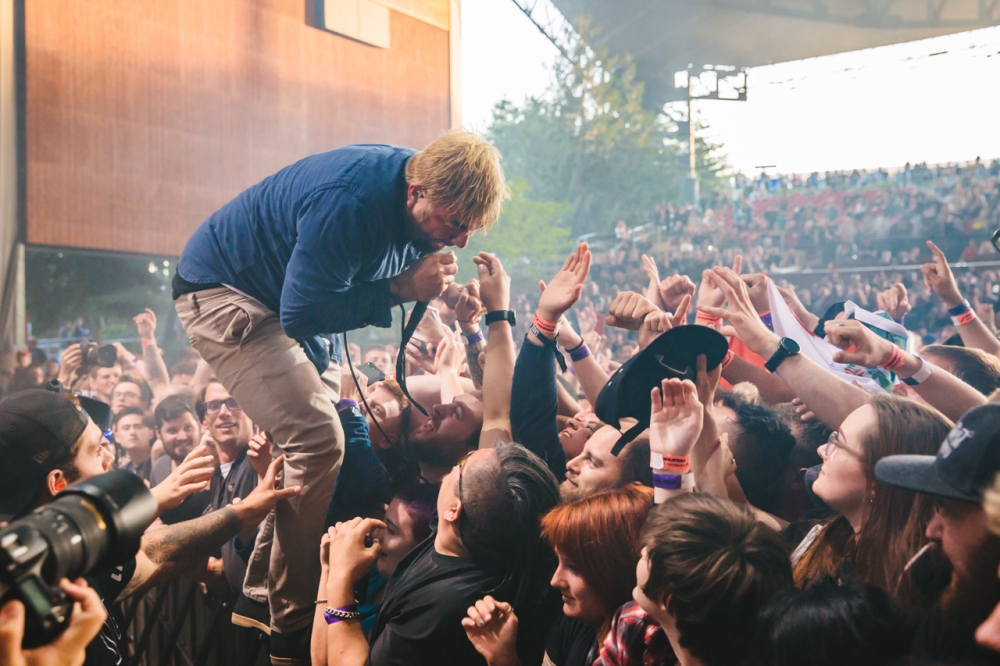 Having joined forces for a powerhouse co-headlining tour of North America, Deftones and Rise Against rolled through Auburn’s White River Amphitheatre for a night of iconic rock. Kicking off the night was Frank Iero and the Patience. To a crowd that hadn’t quite settled in yet­–most of whom were still in the merch lines–Frank Iero (formerly of My Chemical Romance) led his band through a short, mixed-bag set of punk-influenced, emo-leaning rock.

Post-hardcore band Thrice tore up the stage next, with a way-too-short set of tracks that mixed classic tracks with material off their 2016 comeback, To Be Everywhere Is To Be Nowhere. Guitarist/vocalist Dustin Kensrue’s voice was as blistering as ever, wavering between soft and scream throughout their heavy breakdowns. The band was exceptionally solid, winning over new fans and getting much love from the folks up front who thrashed right along with them on tracks like “Hurricane,” “Black Honey,” and “The Long Defeat.”

Then, out of a thick sea of fog, Deftones kicked off their set with the classic track “Headup” off their 1997 sophomore album Around The Fur, which immediately had the devoted fans engaged. From there, led by frontman Chino Moreno, the band threw down the gauntlet. With over 20 years and eight albums under their belts, Deftones had plenty to draw on, and it seemed the crowd knew it all.

Moreno was a firecracker of energy, jumping on the monitors and into the barricade to yell lyrics into fans’ faces as they surfed toward him, fists in the air. It was easy to see why this iconic alt-metal band has maintained their ferocious following all these years, and the set catered to their back catalog with favorites like “My Own Summer (Shove It),” and “Change (In the House of Flies).”

For ten minutes before they took the stage, the crowd was chanting “Rise Against” with enthusiasm, and the sun finally dropped below the horizon. As the strobe lights went up and the opening video sequence ran, the punk rockers led off their set with “Ready to Fall,” from their 2006 album, The Sufferer & The Witness, and a few older fan favorites.

Supporting the June 9th release of their eighth studio album, Wolves, they did play some of their newer tracks, at times obliterated by light, and the band left it all on the stage in a whirlwind of action. While they were nearing the end of this massive tour, each band retained every ounce of power they are known for.