By Kriston McConnell on January 5, 2018@Kristonisms 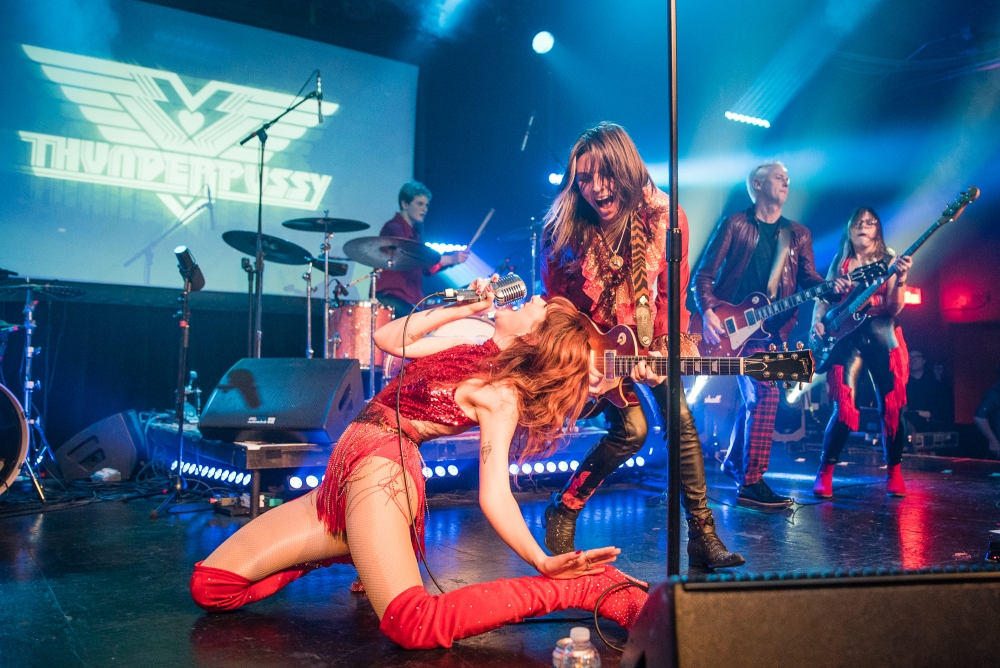 They say how you spend New Year’s Eve is an indication of how your entire year is going to go. While that’s not really true, it doesn’t hurt to ring in the new year on a high note. For the lucky people who snagged a ticket to Thunderpussy’s NYE performance at The Showbox, that’s exactly what they got to do.

KOLARS were the first to hit the stage. The charismatic duo had just the right kind of energy to stir up some excitement in the crowd. They had a great sound with a unique twist – their female drummer kept time by tap dancing on a modified kick drum. It was a sight to behold and incredibly entertaining to watch. Their songs were fun to listen to, and they absolutely earned themselves some new fans at the show that night.

The next band to perform was the Seattle-based advent-jazz group Industrial Revelation. Jazz might not be your first choice as an opening act for a rock concert, but their style fit in well. Their bassist, who wielded a beautiful standing bass, was very animated and kept shooting huge smiles at the other members of the band. They were enjoying themselves, which shone through their entire performance.

When Thunderpussy finally walked on stage, the crowd went wild. They brought out about a dozen dancers, all sporting bright blonde wigs and shimmering silver dresses. The band members were sporting glittery white jumpsuits. A few songs in though, each band member ripped off the jumpsuits and revealed sexy black and red attire that represented the “fire” side of “Fire & Ice.”

There is no doubt that the band’s lead singer, Molly Sides, is an excellent entertainer. She knows how to engage the crowd and she exudes complete confidence while she’s up on stage. All of the band members have great stage presence, and it’s clear they have a great relationship with each other. They were genuinely excited to be performing in front of a sold out venue, which made their performance that much more enjoyable.

Those who were lucky enough to snag a spot next to the catwalk that was attached to the stage got to see Molly up close and personal every time she strolled to the podium and serenaded the crowd. She did so during almost every song they performed, including their recent singles, “Speed Queen” and “Velvet Noose.” They performed a number of popular songs as well, including “Fever”, “Disco”, “Badlands” and many more.

The evening was full of surprises, including guest appearances by Mike McCready of Pearl Jam and Kathy Moore of The Guessing Game. Both are accomplished guitarists in their own right, so it was incredibly exciting to see each of them share the stage with a burgeoning rock ’n’ roll band.

Though we missed midnight by a minute or two, there was an official countdown and an explosion of confetti and champagne to celebrate the new year. Molly walked over to the catwalk and poured champagne into eager fans’ mouths. The show did not end there though, and Thunderpussy performed another handful of songs before the night was over.

Thunderpussy ended their set with a massive collaboration between the three bands as well as McCready and Moore. Their final song of the night was a cover of the classic hit, “Refugee,” by Tom Petty and the Heartbreakers. As soon as the main chorus dropped the crowd exuberantly sang along. Before the song was over, Molly leapt into the crowd and they held her up as she twisted and turned into different poses.

This show was easily one of the best shows some of us have seen all year. Anyone who is curious to see the band live should absolutely make it a priority to see them this year. It would be worth anyone’s time.

Kriston began her writing career as a passionate music fan. She attended dozens of shows, purchased CDs, vinyl and even cassette tapes of artists she barely even heard of. Shortly after joining a band's street team she happened to meet blogger Jacob Tender (now with Alternative Press) who asked her to write for his blog. After a couple of months he joined the staff of Under The Gun Review, and brought her along for the ride. After spending four years as a major contributor to the publication she moved on to be a web content contributor for New Noise Magazine, whose print magazines have a national reach.
Related ItemsAlex CrickChristine MitchellFeatureKriston McConnellNYEShowboxThunderpussy
← Previous Story Blue Helix Premiere “Anti-Social Butterfly” Video
Next Story → Fates Warning Kicks Off West Coast Tour at Studio Seven