Gogol Bordello gets boisterous at The Neptune 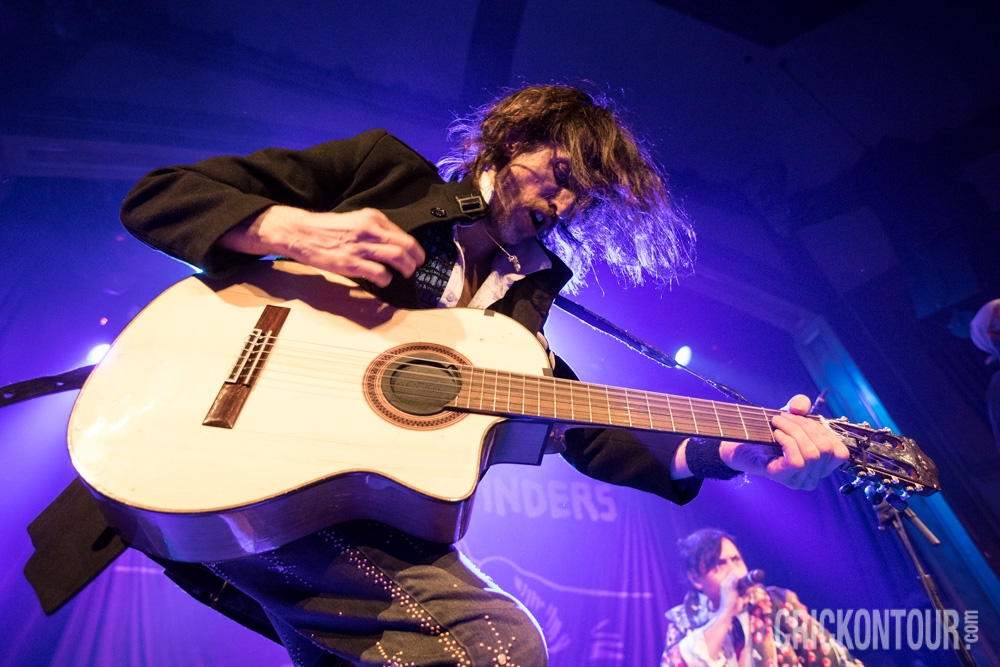 Gogol Bordello at the Neptune Theater

I’ve been attending concerts for twenty years, and this was my third time seeing Gogol Bordello. Tuesday night’s show at the Neptune Theatre in Seattle, WA, provided something, however, that I have never seen in all my concert-going. Although it’s been awhile since I heard a front-man yell, “circle pit, motherf*ckers!,” I was more surprised by a small elderly woman in a traditional headscarf and a wool overcoat who gingerly but spryly, made her way through the dance pit on the ground floor of the Neptune. She danced all the way through “Break Into Your Higher Self,” the band’s opening number for the evening.

When the crowd picked up for “Not A Crime,” the babushka headed to the back, although I saw a very satisfied smile on her face as she passed me through the crowd. Gogol Bordello is known for an energetic show of American punk rock with roots in Russian and Jewish folk, Middle Eastern pop, as well as Spanish salsa. Their unique take on folk songs turned working class punk anthems provide for a show that, as proved on Tuesday, cross enough cultural (and, apparently, age) barriers that anyone can enjoy.

Their front-man is Eugene Koontz, or, as I like to think of him, what would happen if Inigyo Montoya from The Princess Bride started a band. He’s cavalier, a bard in the classical Russian sense, and a showman above all – he slings a holster of roses around his crotch to distribute at the end of the show, for one thing. His fashion sense suggests Shakespeare and also a very bawdy Mr. Darcy, for another. His band does not fall short, from the dred-wearing Cuban MC and bongo player to the Greek violin-rocking professor, and their energy doesn’t dwindle for the nearly two hours they take the stage.

Although they have a new album to be released this year, a forthcoming reissue of their original LP, American Passport, meant many fan favorites were on the bill (although there was a noticeable absence of “American Wedding”). A mid-set breakdown for “Alcohol” and long solo featuring members of the Balkan-inspired brass funk opening act, Lucky Chops, provided the only respite during the high-energy show. The first act culminated to a vigorous issue of “Start Wearing Purple,” met with the aforementioned circle pit by the audience, and a gypsy on a bass drum. An encore with Eugene performing solo for “Sun Is On My Side,” a slower, classically inspired folk song that showcased his vocal range and emotional deliverability, finished with tracks off of their classic albums Gypsy Punks Unite and Super Taranta!

Gogol Bordello provides entertainment for all, an inclusive alternative to Tuesday night mass, and perhaps the best excuse to come in from the cold.

Meredith Smith is a writer in Seattle, whose musical roots date back to mid-90s ska and punk shows. She writes about the intersection of politics and music, as well as upcoming shows and Seattle events.
Related ItemsAlex CrickFeatureGogol BordelloLucky ChopsMeredith SmithNeptune Theatre
← Previous Story NEW MUSIC – “We Can Do It” from OK Sweetheart
Next Story → The Moon Is Flat’s “Long Enough”