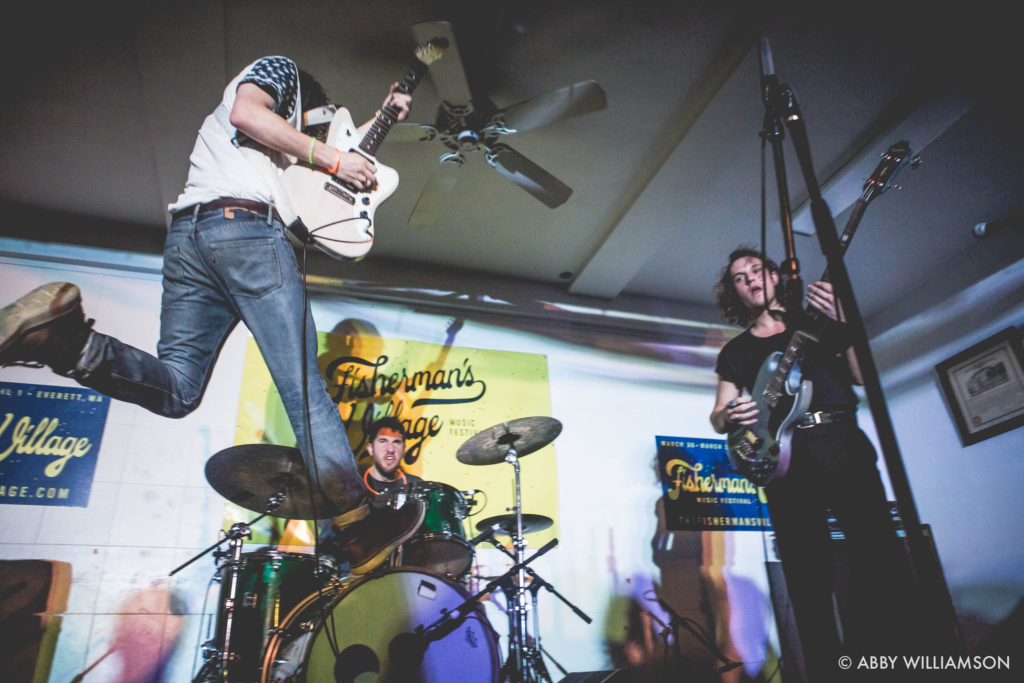 My ears are buzzing, my knees are cracking and I seem to have a serious case of what is known as “cankles.” These are the results when 57 bands, five venues and thousands of people come to take over all three days of Easter weekend. The highly excitable and pounding Fisherman’s Village Music Festival (FVMF) took place in downtown Everett for its 5th year now and every year has been a blessing to see how deep the roots of Everett Arts anchor down.

Being able to cover all 57 bands in three days spread across five venues requires a lot more literature space and a bit of omnipresence, which is a talent I am working on but have not yet brought to fruition.

Footnote: Abby here, I’ll be adding in some tidbits about bands that David may have missed, because there was just too much good music for one person to cover it all.

Some of the music I had the privilege of seeing but not enough space to explain the awesomeness were Acid Tongue, Red Ribbon, Oberhofer, Spirit Award, Wild Ones, Sphyramid and The Porters. They deserve a shout out, to say the least. You can see the weekend’s full line up at thefishermansvillage.com.

The usual suspects of larger than life stages were Tony V’s and Historic Everett Theater and debuting this year was Normanna Lodge and the award-winning Narrative Coffee. Normanna Lodge was perfectly described on a Live In Everett podcast by FVMF curator, Ryan Crowther, as “a place where you take Grandpa for pancakes.” And Narrative Coffee provided a soft, modern and almost minimalist aesthetic. Both venues provided exceptional sound.

Black Lab Gallery took my award for most creative stage and lights! I became mesmerized by the set-up designed by local sound and stage powerhouses Dada Fructose (Adam Bagley and Alex Vincini.) All the column barricades, walls, and ceiling were layered in reflective mylar. The inspiration for the stage was labeled “The Future is Chrome” and tagged with fake price tags and signature series as if Andy Warhol titled the walls. Black Lab’s mantra is “Where the Art Doesn’t Suck,” and that principal was in full effect. At one point during the weekend, Vincini’s eyes went crossed from tunnel vision due to visual effect focus; I had to buy the poor guy a beer.

Sleepover Club  kicked off the Normanna stage with energetic garage punk. At one point during their set, the band played the fantastic “Wednesday Off,” which saw guitarists and singers Sierra Rozario and Katee Brown trading riffs about their workweek and culminating in a throat-shredding chorus. Rozario came down off the stage and into the crowd with her tambourine to punctuate the whole thing. It was a great way to begin a festival. Can they open for all of the rest of them this summer?

Normanna was killing it all night! After Sleepover Club, Oliver Elf Army took the stage to a huge crowd! The Everett love was strong in that room, chanting along to the infectiously charming “fuck off Nazi punks! Fuck off Nazi punks!” It was magical. I can’t wait to see them at Band in Seattle with Fuzz Mutt next month on May 10th.

At Black Lab, Hilary McGowan’s dynamic one-woman show goawaysun matched costume and backdrop in the style of her new synthpop single “VHS Tape” with a sparkling wardrobe and unstringing VHS ribbon used as a curtain shimmering behind her.

The Black Tones are crunchy yet eloquent, and play like a voodoo snake worship circle. Their stage presence is something to make Mick Jagger jealous. Eva Walker hung her guitar over the stage and allowed the fans to strum and tap the frets as if they were members of the band. In their finale, Cedric Walker made his way from behind the drum set to pull crowd members on the stage to deliver a bone-chilling sing-a-long for “Arrows and Stones.”

I was feeling a bit nostalgic starting the day with Caspar Babypants while tons of children were taking over Tony V’s like a chapter from Lord of the Flies. Caspar (frontman for Presidents of the United States of America) has gone from “Fuck you kitty” to “3 blind mice” but still sounds like PotUSA. He also took mustered up my childhood by covering Nirvana’s “Sliver.”

If Mount Eerie cannot bring you to tears, then you have no soul. Phil Elverum compliments what seems like prose poetry with a soft acoustic guitar. His stagnant expression of the confusion that comes with loss and the willingness to embrace it left me breathless to where I immediately needed a cigarette, a long walk, and a deep hug.

Tony V’s delivered some great bands on Saturday, from Belgian Fog‘s lovely synth pop (and even a kick ass Smashing Pumpkins cover), Tacoma’s own Mirrorgloss‘s upbeat R&B, and Wild Ones’ unbelievably catchy pop songs. The Seshen closed out the stage for a mesmerizing performance.

Simon Nicol and his one-man show, Leava, create a constant bridge connecting harmony and heavy to the place where you first realize when you are dreaming. If teleporting becomes a real thing, he is already writing the music for the teleportation elevator. It’s safe to say… he is going places.

The new and talented Narrow Tarot were bringing their catchy blissful surfer charm. They’re like a downtown Everett supergroup composed of four musicians that decided to jam together one weekend in a living room, and now they are taking over the town like a viral outbreak!

Plus – fun fact it was Narrow Tarot’s like fourth live performance, but you never would have been able to tell because they are so fun!

It has been said the core of punk came from teen angst, and that is fully displayed in Fuzz Mutt, who just happened to release their debut record ‘COLORLESS’ last week. These kids are straight to the loud and aggressive side of just rocking out. No dialogue, just adrenaline pumping jams which create excessive whiplash. I needed a chiropractor after their show.

After Fuzz Mutt, Nail Houses was next on the lineup, but when normally solo Christian Smith took the stage with his former Crystal Desert mates Ryan Alexander and Josh Ihler, plus Henry Yarsinke Jr of KSER’s The Stereo Wire, things seemed a bit curious. Soon our curiosity was rewarded with Ryan took the mic to proclaim, “We are not Nail Houses, we are a new band, called BAD. OPTICS.” *Cue screams* And I’ll let David elaborate.

A quintessential voice to the influence of anti-totalitarianism is trapped inside Bad Optics. Through fire and fury, the crowd went insane for the white-knuckled riffs at a speed bag pace. The mosh pit actually brought down the stage PA on Christian then some Skumbag jumped in with a mop to begin cleaning up all the fallen beer soldiers. But hey… What else can you expect from a highly charged show!

What else, you ask David? What else? Well, towards the end of the set after the coffee and beer on the floor had been cleaned, Christian’s microphone stand broke, and Max Stephens of Fuzz Mutt grabbed that microphone so Christian could finish the song before switching out the stand. It’s what friends are for.

Apollo and the Rockets, a band purely made of music theory and just so happened to manifest inside pop, soul, and R&B. Seriously, they make Bruno Mars sound like he is in the middle of puberty. If they were alive in the days of Motown, they’d be giving lessons. From catchy riffs and sing-y hooks, this band is something to get addicted to!

Steel Beans, formerly a 1 man show, singing, strumming and drumming at the same time, has magically cloned himself into a 10 member unit sounding as if Frank Zappa took over Oingo-Boingo. The sax player was in a flight suit. The trombonist used a mannequin head as a mute. There were 2 sets of percussion, keyboard, bass guitar, trumpeteer, violins and congas… because… why not! Replace Electric with Everett and you have Everett Light Orchestra (ELO). It’s like a funky big band jazz wearing tie-dye.

Donna Donna is an omnipotent 2 woman band from Spokane with strikingly heavy blues tones and a stage presence that represents the same locomotion of Thunderpussy.

Actionesse played with the same intense flurry only found in an 80’s or 90’s action movie soundtrack, complete with horns and pounding thunder of drums and guitars all equipped in a 4 piece band.

If the Melvins, Butthole Surfers, and The Grateful Dead had a love child, they would be named The Moon is Flat. Hearing this group of musically talented misfits has is like being trance-ported to the dark flat side of the moon, stuck in a crater and finding enlightenment. Early in their set was a cover of Radiohead’s “Creep,” which in my opinion was coated in stardust. About halfway through their extended performance one of their songs sounded like a dirtier version of Ted Nugent’s  “Stranglehold” then flipped into Chris Isaac’s “Wicked Game.”

I spoke with Kyle Ledford (Soniphone Records) after his set with The Moon is Flat. Grinning ear to ear, he could not stop speaking about all the love and support in Everett, “Everything we do is for here, all the efforts, all the love and we keep driving forward for it. There is so much love and talent in this city, the best part is that it gets overwhelming but never stressful.”

I think I will end the Fishermans 2018 brief documentary on that note. I could not have said it better than Ledford. That’s a wrap…See you all next year.