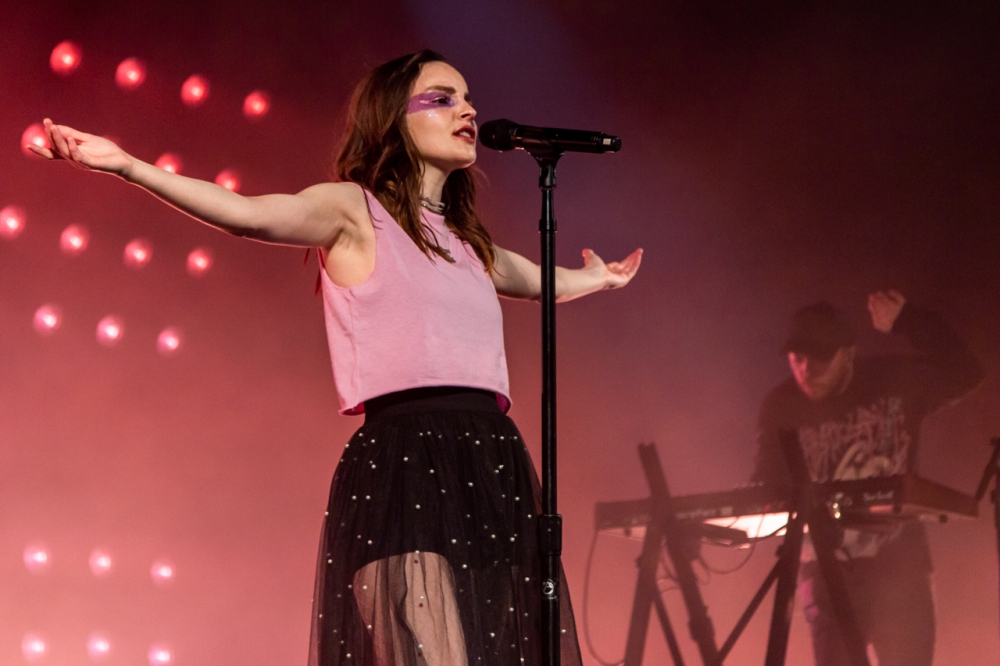 CVRCHES at The Paramount (Photo by Stephanie Dore)

I feel like I’ve been listening to CHVRCHES forever. So the fact that the Scottish synth-pop band is only seven years into their existence is surprising, almost shocking. When their debut, 2013’s The Bones of What You Believe, came out, it felt like the freshest sound on the air. And the release of this spring’s Love is Dead, the band’s third studio full-length feels the same, only punchier and more refined, each track ready for heavy radio play.

They brought that trademark dancehall-meets-pop to Seattle’s historic Paramount Theatre this week for a live performance that stood testament to the band’s emotive, yet intimate, capabilities.

The show opened with LA band Lo Moon, whose self-titled debut was released just this year. The trio—plus a touring drummer—delivered a perfectly measured set of atmospheric, synth-laden indie-rock. What it lacked in energy and diversity, it made up for in epic romanticism and almost-too-perfect craftsmanship. Each track, while unquestionably appealing, felt a bit repetitive. The band has certainly carved a niche, but hopefully they will find a way to parlay that talent—and production—into something more intriguing than just soothing harmonies as they build out their catalog with future releases.

Ready for a wake-up call then, the audience was aflutter with anticipation when the lights dropped and smoke filled the venue. It was time for CHVRCHES, and the fans were ready.

Opening the set with Love is Dead’s lead single, “Get Out,” the band had everyone singing along in seconds, and it didn’t take long for lead vocalist, Lauren Mayberry, to show just how dedicated she is to the band’s energy. By the time they hit the third track, “Bury It,” off 2016’s Every Open Eye, she was center stage, performing full-body headbanging moves to the massive beat.

While it can often be difficult for a synth-forward band to translate well into a live performance, CHVRCHES didn’t miss a beat. Their live sound is as textured as their records, mashing goth darkness with pop maximalism into tracks that find the audience trading dance moves with Mayberry and singing instantly-recognizable lyrics back toward the stage.

Their 90-minute set leaned heavily on the new record, including Martin Doherty taking the lead on the thundering “God’s Plan,” and the slow jam “Really Gone,” which saw Mayberry take an unusual seat at the front of the stage. Mid-set Mayberry paused to explain that the whole show was being live-streamed to children in hospitals across the country via Melodic Caring Project, and welcomed the crowd to say hi to everyone watching.

They closed the main set with “Leave a Trace” and “Clearest Blue,” two romp-heavy tracks off Every Open Eye, and a short political rant before Mayberry ran from one corner of the stage to the other, making sure everyone in the crowd was with her ’til the end. A two-track encore wrapped everything up with a perfect bow.

Overall, CHVRCHES did exactly what they do best: accessible synth-pop with a side of outspoken sass. Their perfectly produced earworms are still just as fresh as the day they started, and their live shows still keep fans in the grips of danceability, communing with the band’s post-goth production and soaring vocal strains.