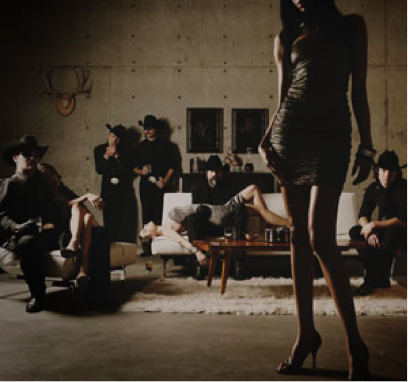 Brent Amaker is no drugstore cowboy. With serious love of DEVO, Kraftwerk, and Battlestar Galactica, he and his band, The Rodeo, are known for their cinematic Western vibe and diligent touring ethic. Their fourth studio album is scheduled for release late this year.

SMI: It is nothing new for modern artists to throw some country twang into their alternative or indie rock but you guys play real, traditional country-western music. Can you tell me a bit about the genesis of the project and how you came to the decision to commit to your very specific sound?

B.A.: I’m not completely sure what “real” country-western music is anymore.  We’re mostly influenced by Western Cinematic music and visual images of the Wild West that popped up in the 1950’s and 1960’s.  We started with this idea, and over time, the band became less about the concept and more about the band.  But that initial concept gave us a foundation for the band.  I’ve always been a huge fan of bands like DEVO and the Ramones.  We wanted to do a similar thing with Western music.  That’s how it started.

SMI: I am very curious how you guys were initially received in Seattle. How were those first few shows?

B.A.: The first few shows involved motorcycles.  In the beginning we had this grand idea of riding our bikes to every show.  I can remember parking five road bikes on the sidewalk in front of the Sunset Tavern.  I’m not sure we could do that today.  People didn’t know what to think of us.  Maybe it was the motorcycles, or the matching black cowboy outfits, or the western music in a rock club.  We were definitely not part of what was happening in Seattle.  The people who showed up had a good time. We drank a lot in those days, and so did our audience.

SMI: You have performed all over the US and even in Europe, has there been a wide variation in the crowd response to the Rodeo what is your Best Gig?

B.A.: Almost every gig that has happened on the road has been a favorite.  Some shows have been in front of big crowds and some of have been empty clubs.  The point being that traveling and touring in of itself is what the band is all about.  We don’t change out of our clothes after the show.  We sleep on a floor, or on top of our van, or if we’re lucky we have a nice hotel room.  We roll over in the morning, pull on our boots and our hats, then move on to the next town.  To me, this is the part that the public doesn’t get to see.  The Rodeo is a full on emersion in cowboy road culture.  And I have all these great stories that come from some really awkward situations.

One show in Holland was particularly memorable.  We were on a three-week tour and this would be one of our first shows in Europe.  In the US a similar venue would have a max capacity of 100, but there was close to 200 people crammed in to the space.  Everyone was drinking hard and chain smoking, and there was absolutely ZERO ventilation.  One rowdy euro-hillbilly was set on picking a fight.  Half way through our jam, he jumped on stage and started thrashing about.  I gave him a swift kick with my boot and he flew off the stage and landed flat on his back.  He was back up again and on the stage swinging before I could blink an eye.  But before he could touch me, by drummer and guitarist dropped their instruments and got him by the back of his shirt.  Apparently this guy was the neighborhood drunk because a bunch of locals were right there with my crew, and in an instant, they got him out.  The thing I loved about that situation was that it all happened in a flash, like a car accident.   And The Rodeo didn’t drop a beat.  I’m not sure the song ever stopped.  The second the dude was taken care of, the music was pumping and the band was back in action.  That only happens with a band that tours.  Nothing phases these guys.  And, that’s what I love about the Rodeo.  A “Best” gig for me is any show where we do our thing and get shit done.

B.A.: I remember a time in Bakersfield California when Tiny Dancer turned to me on stage and said plainly without emotion “this is the worst moment of my life”.  We were playing a historic Honky Tonk complete with photos of all the country music greats on the walls.  The club was full, but the crowd clearly did not like us.  We were forced to use the opening cover band’s gear, and the sound system sucked.  I couldn’t hear any of my vocals.  Tiny Dancer couldn’t hear his guitar.  I know for a fact that would be on Tiny Dancer’s list of worst shows.  And even for me, that was a rough one.

SMI: There appears to be a very well balanced and deliberate ratio of humor to sincerity in what you do, as someone who tries to do this in my own music I have found it extraordinarily hard to ensure that I do not fall onto the novelty side of the fence… It seems to come very naturally to you but is this something you struggle with as well?

B.A.: No, I don’t struggle with humor at all.  Comedy is an integral part of life and often helps us cope with difficult times.  And humor is one of the key ingredients used in story telling.  If you listen for it in popular music, you’ll find it’s been there as long as songwriting has existed.  And I believe that if a person is sincere in their message, it’s OK to deliver that message with a smile.  And I’m cool with people drawing their own conclusions from that, even if they completely miss the point.

SMI: Your Self-titled album has a lo-fi punk rock essence to it Howdy Do seems to be your most humorous and abrasive And then Please Stand By feels like your most mature and self-assured record, is this a fair assessment and if so how would you describe your upcoming release?

B.A.: The next LP is titled Year of the Dragon. And by the way, I’m a mother fucking Dragon. So watch out!  The songs are good. The recording is good.  You’ll dig it.

SMI: I know this has been covered before in other interviews but for those just getting to know you would you describe the Whiskey Baptism, its genesis and how the recent changes in Washington State liquors has affected your hometown shows?

B.A.: We don’t really do that anymore.  I suppose that if someone bought a round of whiskey for the room, I’d administer the rites.  But what a stupid law that was.  I’m glad I can drink on stage again.

Not only is he a multi-media journalist, he is also an accomplished musician. He is the founder of SMI and drives the creative look, feel and branding for the publication. His years of writing, arranging, and performing live music in a variety of genres inform his ability to communicate the message and the mechanics of music. Roth’s work on SMI reflects his philosophy that music is the universal language, and builds community. He believes it has the power to unite people of every race, religion, gender, and persuasion.
Related ItemsBrent AmakerBrent Amaker & The RodeoInterviewSeattle Music Happeningstimmy held
← Previous Story Live Review: Narrows bring loud intensity to the Comet Tavern
Next Story → SMI Radio Ep. 56 On Demand: Philana and SMI Contributor Mikhael Mei Williams (AEG Live NW)