Surprise! Foster The People take over The Crocodile (Photo Slideshow)

By Arlene Brown on January 21, 2014@brownfotobug 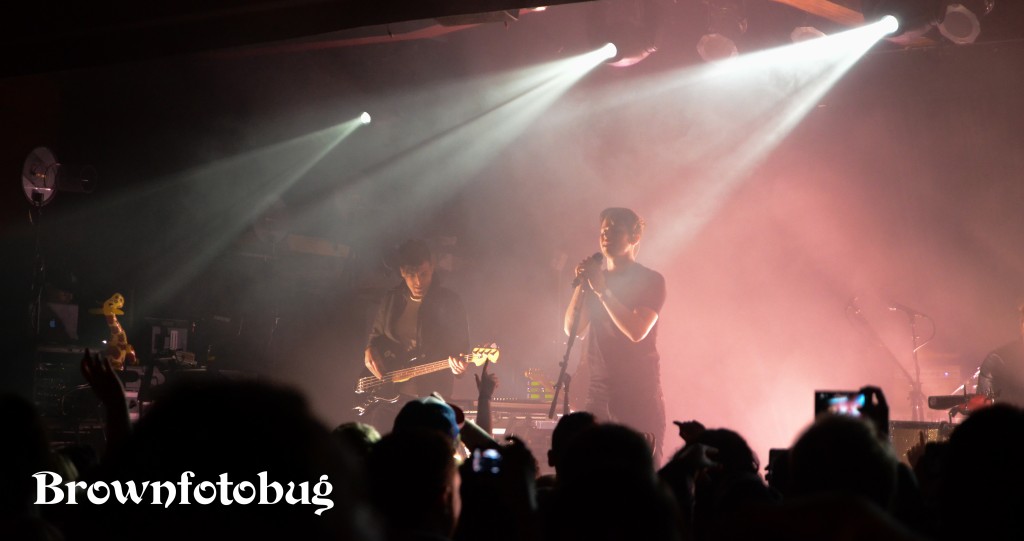 Foster The People Live @ The Crocodile (Photo by Arlene Brown)

I knew the night was going to be something special when I drove down Stewart Street heading to The Crocodile. People on the street were cheering and screaming “GO SEAHAWKS!” But something told me that there was going to be something even more special about this evening. A last-minute surprise show with Foster the People. Yes. If there was anything that could make the night get any better than the Seahawks going to the Superbowl, it would be getting to see FOSTER THE PEOPLE. At the Crocodile. It was, destiny.

You could feel the electricity flowing from the NFC Championship game at the Clink, down the streets of Seattle and right into The Crocodile. Almost a giddy type of energy; an anxious, vibrant, “best day ever”  vibe was on almost everyone’s face Sunday night.

So, when Tom Eddy took the stage to open up the show, the already warmed up the crowd was ready for something more. With just his acoustic guitar and his gentle alto-y scat-filled, humming voice, everyone was enchanted.  Even though he was being heckled by adoring ladies in the crowd, he was confident and charming.  And yes, you can find him on Myspace.
My favorite songs were “Bread Maker’s Blues” and Paul Simon’s “Sparrow.” He showed off some power in his voice, too, completely winning me over. And for those that kept thinking they’ve seen him before, he’s also the lead guy with Seattle’s Beat Connection. I definitely want to see him again.

I thought an acoustic set would be too much of a downer just before Foster the People exploded onto the stage. But an eerie, haunting feeling came over the stage and the audience when Mark Foster, Mark Pontius, and Jacob Fink came on stage. The lights were dark, with red and white beams highlighting everyone on stage.   That only lasted one song.  The rest of the set was filled with powerful and catchy lyrics, guitar riffs, trance inducing drum beats, and is a big step up from their past of “Pumped up Kicks.”

Their new album, “Supermodel” definitely showcases the group’s guitar, keys, and musical skills. The mix has that Foster the People flavor, but with a maturity that shows the band mates have a true love and passion for their music. It shows. Very emotional. Very moving. I, along with every person at The Croc tonight, was hypnotized and captivated. You couldn’t help but sway and dance and jump to all the songs.  About 10 steps up from their last album.  And I liked their last album, Torches, too.  But this one is going to be much bigger.

I am not going to give any more details about the rest of the night. If you missed Sunday’s show, don’t worry. These guys will definitely be back touring with their new album. I’m going to buy it and play it over and over when it releases in mid-March.  And, I hope to see you when Foster the People come back to Seattle!

Arlene Brown is both a writer and photographer for SMI. She likes to take things one picture at a time. Covering and reviewing shows from Soundgarden, The Proclaimers, Lorde, The Head & The Heart, to Hank3, Bob Log III, New Politics, Black Joe Lewis, Grouplove, including local and national rising bands and more, she truly loves to try to get that perfect shot. Looking for that raw emotion, energy, power that only live music can deliver, she captures the essence of a show in her own unique style.
Related ItemsArlene BrownFoster The PeopleSeattle Live MusicSeattle Music HappeningsThe Crocodile
← Previous Story Southern Culture On The Skids: Carolina fried and delicious (Photo Slideshow)
Next Story → Brent Amaker truly is the one at Neumos (Photo Slideshow)