By Christine Mitchell on June 5, 2017@Housetornado37 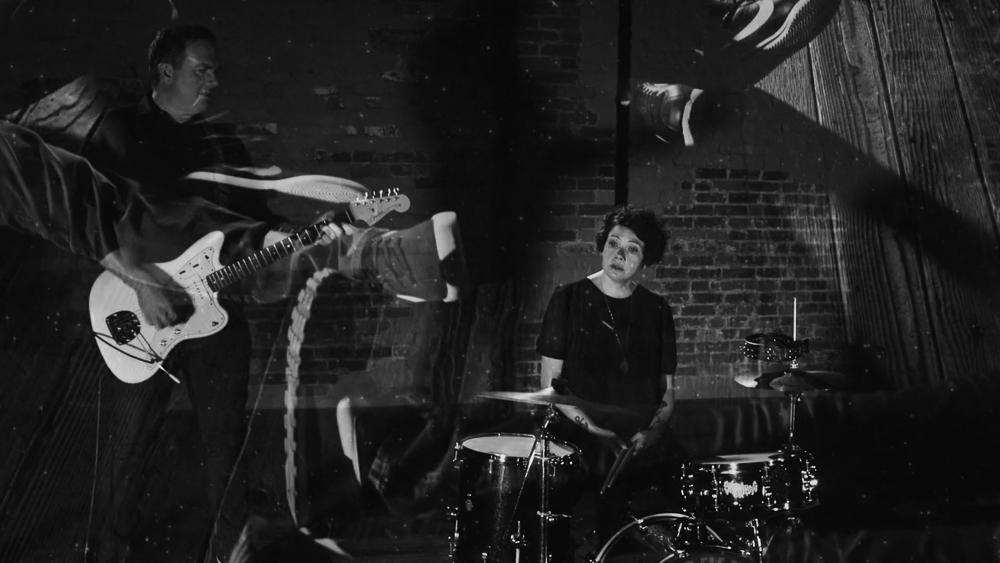 Everett’s Oliver Elf Army released Telescope earlier this year, a four song masterpiece of dark, absurdly malevolent pop. Today marks the release of the video for their single, “Black Nikes,” a song based on the Heaven’s Gate cult and its mass suicide on March 19-20, 1997. OEA’s take on the story is all headlong romanticism while simultaneously goosebump-inducing.

Director Daniel Cardenas worked with Oliver Elf Army to create a visual interpretation that is simple, yet weighty. The opening movement briefly pans across legs splayed across the floor, all with footwear sporting the swoosh logo. The focus then becomes Martin and Mary Adams as they play, and the astronomical designation of the Comet Hale-Bopp (C/1995 )1) flashes across the screen like something out of War Games. Later, applesauce drips out of a container as pills spill upon the ground in slo-mo. The black and white cinematography is simple and beautiful, with nothing to distract from the music and those playing it.

As the song moves into its emotional coda, we see that the Adams are surrounded by Nike-clad corpses. “All I wanted to do was explore space with you” hangs in the air as Mary and Martin lie on the ground themselves, holding hands, singing together, Mary with bare feet. Space is superimposed on them, and the end fades out to the perky clouds of a spring day. It’s a gorgeous (albeit hair raising) end to a song about an event with its own tragic end.

SMI is delighted to present the “Black Nikes” video and look forward to the future of Oliver Elf Army.

Christine Mitchell has been poring over album liner notes pretty much since she acquired the skill of reading, and figured out the basic structure of rock songs at an early age. Whether it’s the needle popping into the first groove of the record, the beeps that signal the beginning (or end) of a cassette tape, or digital numbers ticking off the seconds from zero, music brings Christine happiness, ponderous thought, opportunities for almost scientific study, and sometimes a few tears. When she started attending live shows two decades ago, a whole new piece of the puzzle clicked in and she has been hooked ever since.
Related ItemsChristine MitchellFeatureOliver Elf Army
← Previous Story KillThrax Tour Coming to Showbox Sodo
Next Story → New Music: Asterhouse’s ‘Errors That Smile’